Mike | Wednesday, February 28, 2007 1 Comment
Hey bloggie, sorry I've been neglecting ya a bit. Next week is Spring Break, so obviously all the professors rush to give work and whatnot right beforehand; thus I've been a little busy with schoolwork and whatnot. I also had some odd issue and was not mentally with it for a day or so, but fortunately that basically wore off soon enough.

It's been a little busy in Publication class with writing query letters for our magazine assignment. My first query letter is to a literary magazine called VERBATIM, my second is to a column in Smithsonian (I doubt my idea will be taken up upon), and the third (not yet written) will be to Chicken Soup for the Soul.

The screenie to your left (may be small, but oh well) is something else I've been doing this week. Alas, welcome to the RPG, Castle of the Winds. I actually started playing this because my girlfriend has played this game (she is not an avid gamer like myself, but she enjoys a little small game every now and then) and I have watched her play the game myself. I then decided to give it a go for the hey of it.

Don't let the graphics fool you - this may look like a primitive game, but it's gameplay is well made. The premise: avenge the death of your family (and the burning of a town) by setting out into a dungeon with multiple levels. Get through these dungeons, killing monsters, getting items, and avoiding traps. Get to the last level, and kill the boss. Simple as that.

There are actually two games. The first game consists of two towns; a small dungeon (~4 or 5 levels) accompanies the first town, then a larger dungeon (11 levels) accompanies the second town. The second game used to cost moola, but it is now free and can be downloaded with the first game. The second game consists of one town (with everything you'll need) and one dungeon with 25 levels, the last which hosts the boss of the game, the evil demon lord Surtur. I havn't made it all the way through the second game (I am about on dungeon level 18 or something like that); hopefully soon enough I'll make it.

You can learn all 30 of the spells (most likely will learn all of them before you finish the game), and you can keep like 10 of them in a little bar while playing for ease. Most of the spells are ones you'd figure would be in an RPG game (ex. healing, fire, cold, lightning, teleportesque spells), but maybe you want to try out some of the spells that are less likely in an RPG, such as Transmogrify Monster (changes targeted monster to either a weaker or stronger monster), or any of the detection spells (monster/item/trap; detects them on the map level).

While this game may look really old and savage, it's a nice little gem in the pile of older RPG's that should definately be given a try. Enjoy!

Well I guess that's it for todays blog; Mike signing off (well first I have to hit the publish button, then I can do whatever). Peace. 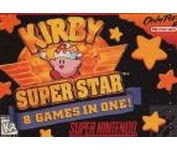 Okies, I probably won't say too much here on this game, but as you know I've been playing some SNES emulations lately, and I decided to give Kirby Super Star a go. As you know, kirby is that little cute pink marshmellow that can fly in the air on puffs of breath and suck in baddies and copy their powers.
Overall, this was a fun little play. The controls are pretty simple, and the content of the game was fun. Probably most I loved the ability to suck in some of the baddies, and gain their powers. Who doesn't love becoming a ninja, swordsman, magician, or even a yo-yo master? There are many other alternate forms you can take, so you'll have to play the game yourself and try it out! Two of the games in this game are also just smaller mini-games, one being a type of quick draw, and the other is based on precision.
---------------------------------------------------------------------------------------------
So.......nothing much going on at this point. I have some work I probably should be doing, but why do today when I can wait til tomorrow? Yes yes....I am known as a pretty avid procrastinator. Fortunately I'm a pretty good one and can get my work done (even at last minute) so I guess that's all that matters.
Wellllll.....I don't think I have anything else to say so I'll just call it quits for the time being. Later.

Lufia II: Rise of the Sinistrals 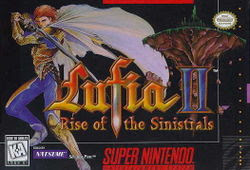 Hey all, the most recent game I've played was Lufia II: Rise of the Sinistrals for the SNES, although I played it as a ROM on the excellent Super Nintendo Entertainment System simulator, ZSNES. This game is known probably as one of the best RPG games for the SNES.

It is good old classic turn-based RPG, and (surprise!) the hero of this game is your basic sword-wielding hero who can use some of the more basic magic (yet of course not the amount of magic that the typical wizard or healer can use). Several characters leave and join throughout the game, but by the end of the game, your party consists of four characters - the hero, the brute fighter, basically a healer, and an elfish (I believe it was an elf) wizard. There is also a 5th character to your party; what is known as a "capsule monster" that you can have fight for you. There are I believe 6 different capsule monsters you can find and switch through (different elements/abilities). Think of these guys as Pokemon - just a little extra power (and meat-wall) to add to your party. You can also feed them your equipment to make them evolve into a higher being.

The story was well written, and followed itself nicely all the way to the end. Like most RPG kind of games like this (like Mario RPG, which I played before this - also a very nice game), I tend to try and max out my characters levels even if it is not really needed to beat the game. So of course I reached 99 with all of my characters (including capsule monster) before the end of the game.

When you are not in battle, you must travel the world and get through dungeons and whatnot to do what needs to be done. 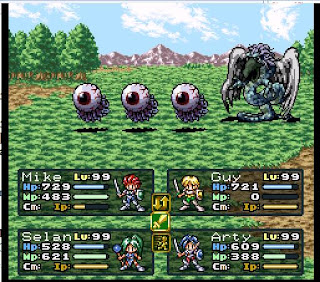 The monsters in the dungeons will only move if you perform an action such as moving, swinging your sword, or using one of the many special tools you can find that will help you get through the dungeons (such as arrows, bombs, and hooks - think Zelda with the hookshot on that one). Touching a monster will innitiate battle. Kill them, and gain the rewarding experience and gold. Simplicity.

One thing that is pretty interesting is the number of puzzles that must be accomplished throughout the dungeons. Some are easy, some are harder. This adds a nice perspective to the game so it's not just a pure hack-and-slash RPG - you might actually need to dust off that noggin'.

There are many towns, where you can do the same good old kinds of things like saving, sleeping at an inn, buying goods/gear, or just talking to NPC and figuring out what you need to do. Later in the game, walking will not be the only way to get around while on the world map - you will also be able to ride one the waters on a ship, which later gains the ability to go underwater, and finally the ability for it to fly as well. So that would make it a subflyship or whatever...who knows.

In general, I do recommend this game to any RPG fan. I think I spent somewhere from 90-100 hours on the game, but of course I spent the time reaching max levels; one could probably get through the game find if their party are all in the 70's or so. This game sure gets a nice thumbs up from me.

I guess that does it for a review; I better get to bed so I can wake up for anthro tomorrow morning. Night y'all.

Mike | Wednesday, February 21, 2007 0 Comments
Hey all, I decided to use one of these questionnaire thingies to kind of post some info about me, any maybe post some extra stuff at the end; enjoy.

All About You- Survey

Favorite Music: I really will listen to anything, except for rap/hip-hop and opera music. I tend to like more oldies, electronic-kinds of music (ie techno, club, trance, etc), soundtracks/movie themes (disney = awesome), and i usually enjoy a good parody (ie some Wierd Al music).

Favorite Movies: In lieu of space, I really can't decide and thus have a lot of favorite movies. In terms of genres, I tend to enjoy comedies the most, and then secondly action/adventure.

Favorite Books: Some of the books I particularly enjoy are some of the Richard Preston books (ie Hot Zone), Harry Potter series, Ender's Game, Douglas Adam books, comic strips/books (I never really read like Marvel comics, but those you'd see in a newspaper such as Garfield or Calvin and Hobbes), magazines

Well, I must head off to class, so afterwards if I think of more stuff to say I'll edit this or whatever and add upon. Have a nice day, peace out.

Ah, well as you can probably read in the profile (if you can't read, you'd probably have trouble asking if you can), I am a Professional Writing major at Elizabethtown College in (surprise!) Elizabethtown, PA. I decided to make this journal simply because I do enjoy writing, but I don't think I really do enough writing that I really should be doing. Also, I like the idea of an electronic journal to share what I wish to share; I am not adverse to technology, I embrace it.

As it goes with the title of this blog, I am indeed also a gamer. The clarification I should make is that I may play games for awhile at a time, but I do not really consider myself a "hardcore" gamer in that I do not eat, breathe, and live games 24/7. I also do not have like a million games to choose from - I try to go with cheaper (or free - free is good) games. I am mostly a PC gamer, but I have done some console (mostly the smaller ones, ie Nintendo and whatnot - no next-gen consoles) gaming. Also, I play games more for the fun experience and thus I am (say it....say it...) pleasant (there we go!) in my gaming. As many studies show how people that play violent video games and not really punished for it become violent, I do not consider myself a violent person at all. I am a well-mannered, nice/kind individual, and I am usually in a pretty good mood. Oh ya, also I do not play World of Warcraft (although I did play a 14-day trial; wow I had no life for those 2 weeks...)

I actually need to cut this short because I am working on Psychology homework for tomorrow, but I'll try to maybe say more stuff about me and my life later on.

Just a note that while the title leads it to believe I will just be talking about gaming, I'll try to expand it out and make it more of a general blog in terms of content (although I will most likely end up talk about something game-related in it at some point).