Mike | Tuesday, July 31, 2007 0 Comments
Hey Bloggie, just checkin in. Only thing I really have to say that happened recently was that my girlfriend came to visit with us this weekend. It was awesome seeing her again, and we had a good time. Mostly we just chilled around the house and watched TV. On Saturday night we got a couple of pizzas from Little Anthony's and rented Ghost Rider starring Nicholas Cage. Needless to say, I think I was the only one who liked the movie, and of course it doesn't help that I like just about any movie I watch (although I would've liked more action in it).

On Sunday the weather was kinda iffy so we hung around and played some FFR on the computer. That night I tried cooking quesadillas for her and the fam, and I was happy that they worked out fine. Props out to Etown's quesadillas for making me think about them in the first place.

Today the weather was nicer so we went out for a walk on State Street and had lunch at On a Roll, a nice little restaraunt. Afterwards we stopped for ice cream at Cold Stone Creamery. When we got back to my house we basically hung around and watched some more TV, then we actually played with Crazy Bones a little. I don't feel like going into a long description about them, so you can Google them if you want, but basically they are like little figures that you flick at the other person's Crazy Bones and try to knock them down. I think the C.B faze is out (don't know if it was ever in), but they are still neat little things to pass the time.

After she left I spent a couple of hours watching Discovery Channel (it's Shark Week), then I ate dinner and then later tonight I had watched last week's Hell's Kitchen and the new Hell's Kitchen that was on. I like the show because the head dude (Chef Ramsey) is such an intense character and really puts a lot of pressure on the chefs. Probably my fav of the cooking reality shows. Next week is the finale, so I'm looking forward to what will happen with that.

Well, I guess that's it for now - now let's see if I can survive the rest of the summer, and in about 4 weeks I'll be back in Etown! Wheee! Peace out, y'all.

Mike | Tuesday, July 17, 2007 1 Comment
Hey there, I just decided to post here for probably no apparent reason. Whatev. Anywho, it's a pretty nice day outside (as usual). I did take a walk to Eckerd to pick up some prescriptions, and I stopped at Rita's on the way home since I havn't had any of their water ice this summer yet. I got myself something like Tropical Melon or something, and of course it was pretty good. My mom had some work done on her mouth, so I was helping my dad in taking care of her for the rest of the day - pretty much gave me a chance to be on the computer all day and just randomly surf the web. Maybe I'll watch a movie later or something; I do have a small list of some movies I wanna see (I also wanna see the 1st and only season of "Freaks and Geeks" since I saw the first episode last year in Psych and enjoyed it). 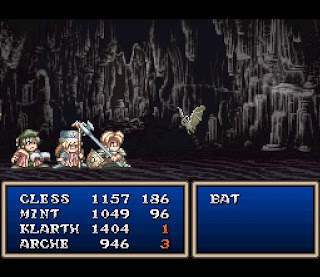 In terms of gaming, I don't really have much to share at this point. At some point, I did start a game called "Tales of Phantasia" for SNES (an RPG), and it's pretty interesting I guess. The battles are real-time and it isn't turn-based. You actually need to move and walk and attack your opponents yourself, which kind of makes it like a 3rd-person action RPG or whatever. You can see a screenie there of just a random battle I photo'ed (I just did it, but I would have tried to screenie a more impressive battle if I had the time), so you can see the graphics are also pretty interesting. I don't think I have gotten really far into it, but I probably like turn-based ones like the FF series a bit better.
Well, I mostly made this post just to make a post and to check up since I had previously left my blog dead for a couple of months without update. I'll try to check in a bit more frequently (maybe like once a week or whatever), and I guess we'll just see how things go. Hope all (read: if there are any) readers are having a good summer - I'll ttyl peace.

Email ThisBlogThis!Share to TwitterShare to FacebookShare to Pinterest
Labels: tales of phantasia

Mike | Thursday, July 12, 2007 0 Comments
Hey Blogger; long time, no type, eh? Man, it’s been awhile. The last time I did something I was a sophomore. Alas, I have moved up to junior status. Here are the classes I will be taking for the Fall ’07 semester (remember I am Professional Writing major/Communications minor):

I’m kind of excited for the Creative Writing class because it’s been awhile since I’ve done creative writing instead of professional, and this is a smaller P/F class with probably just English majors, so it should be a good outlet for my…er…”creative” writing. The other English class is part of major – it appears to be another fun lit course, so whoopee for that. Fortunately, I’ve had the professor before and he’s really nice so hopefully it goes along smoothly.

As for the Communications courses, the Production course seems interesting, and the professor was my freshman seminar professor, so hopefully it works out well. I do know the Comm Dept decided to be unique and use Macs for their building for their supposedly superior audio/video editing and those kinds of software, so I’ll need to learn that system (I’ve been brought up with PC). I write for the college newspaper, so hopefully I can actually learn the correct way to write in the Newswriting class. As for the Applied Comm, we are required to do 2 of: News/Yearbook, TV, and Radio, so I definitely chose this one first, and I’ll probably then choose TV and try to do something behind the scenes or whatever.

Next year I’ll be living in Brinser, which seems like the upperclassmen dorm. I’m not exactly sure what it offers that others don’t, but overall it seems like it’s good (especially since my girlfriend will be living on the floor below me!). My roommate is a really nice guy and a Music major, so he’ll probably be living in Zug (the music building) since I heard that’s where they chill.

As for this summer, I’ve been doing a great job at doing nothing productive. At some point I’m going to need to actually do something, but for the time being I’ve got the bumness down pat. Basically I’ve just been sleeping, gaming, using the Internet, or watching TV.

Basically I guess that’s it for now in terms of my life, so now I guess I’ll say a few words about 2 similar games, Final Fantasy V and Final Fantasy VI. 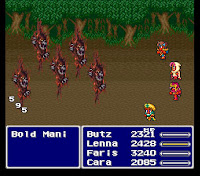 This one I have played through and beat. Although I really have 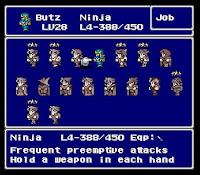 not played other games in the Final Fantasy series, this is definitely a good one. It’s the basic RPG-style game we all know and love. Turn-based, with plenty of vehicles to take you to different lands as you battle against the evil Exdeath. The big thing in this game, and probably the biggest plus, is the use of the job system (picture to the left). There are up to I believe 22 different jobs that you can pick from by the end of the game (you get a couple each time as you progress through the game), and each job has a special abilities which you can gain to add to your total list of abilities. Mix and match your abilities to create a unique set of characters, and go hither to fight the evil!

FFVI (SNES)
This one I also have beaten, and it was pretty good as well. At first I didn’t think I would enjoy 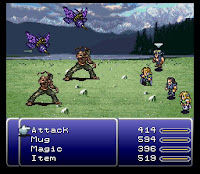 it because I figured it’d take a lot to match up to the job system in FFV, but overall this was another nice play. There are not jobs in this one – to gain spells and whatnot, you need to pick up various summonable creatures placed in “Magirock” and equip one to a character for that character to eventually learn the spells available from that summon. So, to me, FFV seemed to emphasize skills, which this one seemed to emphasize spells (tip: have each character learn Ultima and you pretty much have the game in the bag).

Some quirks in this game was when 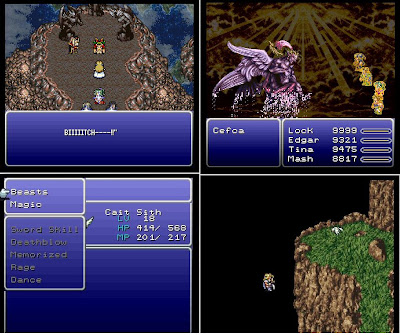 there were times that the game forced you to split up your party (there was actually a sequence pretty early in the game that you have 3 different scenarios to complete with 3 different parties); I felt this constant splitting burdened me with character development, which is a major part of RPG’s. Still, this wasn’t too bad for me because near the end I took the extremist route and leveled everybody to 99 (and taught all spells to all characters *cough* Ultima *cough*), so enemies were a breeze.
Picture-wise; the one way above is basically just one of the many battles you'll be in. Also, just above is a little 4-picture montage. Top left shows one of the weird cutscenes with some fun language, top right is actually the final boss, bottom left shows the abilities screen with different catagories which are only open to specific characters(nothing much to show there), and bottom right is a pretty emo looking screen with a dead bird and one of the characters attempting to jump off a cliff (like I said, pretty weird cutscenes in this game)