Mike | Sunday, September 27, 2009 35 Comments
*Grumble grumble can't believe he caught me*
Hello there Internets world, I was just moping over how my rabbit, Renny, caught me pink-footed. Yes, he took a snapshot in the rare time that I was wearing my pig slippers: 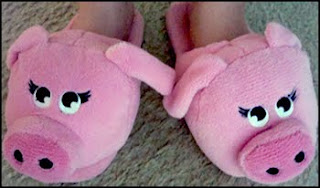 Needless to say, he has blackmailed me to transcribe his thoughts for his own blog here. It will be an ongoing "blogject" (dunno if that's real, but it's all virtual so who cares) that will include plenty of pictures and thoughts of Renny doing the many things he enjoys doing. Something about taking over the human race and making all species equal, I don't know. He's a nutball.

Anyways, everything is fine on this end. It's getting a little cooler, almost finally seems like summer is over and fall shall soon befell us.

Once again, you can check out Renny's blog here: http://rennyroams.blogspot.com/. Please leave comments here or there if there is something you want Renny to talk about, he's a blabbermouth. Peace.

Or am I? Perhaps it's not that I'm lazy, perhaps I don't want failure to be an option. I don't want rejection to kick me back.

I know the kind of response to this. Something along the lines of, "Well, you'll never know if you'd be rejected if you don't apply yourself." I guess I see the other side of this: "Well, I don't know if I'd want to apply myself if I don't know about the chance to be rejected." Actually, what I said may have just contradicted myself, but I'm not in the mood to go back and think on that. I'm essentially an optimist, but every optimist is allowed to have their pessimism, am I right?

It's coming down to about a month left of college. I'm kinda freaked out on what I'll do once I leave. But is this making me do anything about it? No, not really. "Freelance," is essentially my only reply when asked the now-infamous question on my post-graduate plans. I wish I had a better response. I should have applied myself more. I knew this was coming, but I did nothing to stop it. Instead, I let things slide, I went laid-back, and now I'm writing blog posts that start too many of my sentences with "I" - not a good sign, especially for a professional writer, eh?

One of my options is doing something so grand that I can skip some of the basic steps which I should have done earlier, and go straight to doing something I enjoy doing, while making a decent living out of it. However, I don't mind dealing with less - college has certainly expanded my abilities to be resourceful. Wait, if I'm resourceful, shouldn't I already have something lined up for me? It's like I don't mind being resourceful, but only to make my immediate life a little easier. I should probably work on that one. Yeh, I have a whole month to do it. Womp.

So what's a pleasant gamer to do? Beside playing various titles over at Armor Games and started back up a bit with some Titan Quest, I can only sit here and hope I'll be able to survive in this apparent harsh world some call reality.

Hey, maybe they'll have cookies. That would be nice.

The *pitter patter* of the rain outside is rather soothing. You think the weather is hiring? I could invent a couple new forecast patterns to bring all sorts of interesting encounters.

Mike | Wednesday, March 11, 2009 1 Comment
I just finished my nightly bowl of chicken picante ramen...only one of those left, eeps! My roomie picked up Mario Tennis for the Wii today, so the night was spent watching peeps play that, myself playing Hellgate:London, and talking to Stacey.

What an exciting person I am. Do they give Nobel Prizes for Excitingness? At leave give me an Emmy for Best Exciting Mood in Excitingfully Exciting Moments.

Spring Break was a thriller...got our big snow of the season, and essentially did nothing (homework was obviously out of the question). I got some nice formal clothes for interviews and stuff, whenever that happens. Real life rings the doorbell, I hide under the bed until it goes away.

Classes are (mostly) running smoothly. I'm not a big fan of badminton (mostly because I am awful at it; apparently depth perception is a lot more important than I first thought, as I usually am swinging at air and missing the shuttle), so hopefully archery will be more enjoyable (probably the main reason why I chose that class).

My Word, Web, and Design class is pretty enjoyable, especially because most of the class revolved around projects of various sorts. Most of them have us emulate and complete a certain design, while the professor also has us do a couple of bigger self-designed projects. These projects have us utilize the main Adobe CS3 creative apps (Photoshop, Illustrator, In-Design). I seem to have a handle on that stuff, so the class shouldn't be too difficult.

Next is Children's Lit. I like this class because I know the texts we read will never be too long or difficult (makes me reminisce on my own childhood when I used to actually enjoy reading). We also get the opportunity to start designing a rough draft of our own children's stories in different formats (ie the last one had us create the text/illustrator for the first page of a pictured lullaby story), and we will then expand on a couple of those for bigger projects.

Last but not least is Philosophy of Sci-Fi. A free elective, this class is kinda like the "Philosophy Through Film" class I took last semester (same prof), but we read sci-fi stories instead of watching movies. Most of the stories are pretty interesting (reading a couple of Philip K. Dick classics now), although many seem to be "out there," and leave us to our own interpretations. The class is lengthy, 3 hours, and I usually find myself overwhelmed, faced with "What is real" and "Are we robots" and all that sort of stuff.

In the mix of these classes, I've also been continuting to copy edit for the college paper, which has been going well (check out the paper, the Etownian, online). Also, Stacey has been busy with classes, as well as grad school stuff (News Flash: she got accepted to UPenn today!), but of course we've had time to hang out.

Game-wise, I have been playing a couple new titles, including "Titan Quest," "Need for Speed Underground," and "Hellgate London" (yes I know their online servers were shutdown, but the single player is just as fine for me). The first is an action RPG, the second racing, and I would probably define the third as a shooter RPG. All three are pretty sweet; maybe I'll talk about them individually later.