Mike | Monday, March 26, 2007 10 Comments
Sorry it has been awhile since I've posted - I've kinda been busy with work and kind of neglected this blog. I think the professors met together and decided to throw a billion things at all of us at the same time just for the heck of it. That added with my procrastination = ouchie.

I just finished writing a research paper proposal for my American Lit class - who knows if I'll be able to write a 6+ paper on William Carlos Williams and the Imagist movement; I guess we'll have to see when the time comes up. Tomorrow I'll have to write a paper for my Understanding Human Cultures class on some article I should've gotten several weeks ago but consquently just got today - that should be fun. Sigh......work....

Okies, so this will probably be a short review. After I saw a friend playing the game, I decided to try out Pokemon Emerald for the GBA (played on the VisualBoyAdvance emulator). I have briefly played other Pokemon games, and I figured it would end up being all weird Japanese writing and just blah.

However, this game was better than I thought it would be. Sure, it may be a childish series,but meh to that, it was an enjoyable RPG to play through. Like the rest, you basically get to pick one of three pokeballs at the beginning as your starting pokemon. I ended up 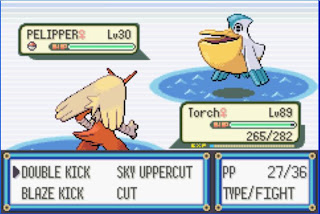 Mike | Saturday, March 10, 2007 0 Comments
Hmm, so it has been awhile since I've made a blog post; I've been on Spring Break this week so I guess I was just too bored to make a post. Yeh....tis a boring Spring Break this year. Most of the time I was either sleeping, playing a game on the computer, or watching tv.

I made myself a list of a couple of movies I wanted to make sure I watched On Demand, including Chronicles of Narnia, Stay Alive, Final Destination 3, and to be honest I already forget the other movies I had on my list. I still watched a bunch of other movies like RV and whatnot (watched that the first night with a pizza). Yeh, so basically I once again made a waste of my Spring Break, and as it comes to a close I face all the work I probably should've done but didn't do for next week. They really like to load us up on the goodies, eh? Oh well, I can take a couple of all-nighters if I need them to do crap. Tis the life, but still yucky work I'd rather not do.

I really havn't done a lot of gaming this break; I think the most I did was some Diablo II (played the mod Median 2008) and some Stepmania - I'll try to write a little something on both down the road in a later blog post, but both are great games. I did a couple of sudoku puzzles because those things are pretty fun, and also I tried to see if I could get any plans going for rooming situations next year (forms for apartments due soon this month), but no definite plans thusfar.

I had my "last supper" tonight, the ever awesome taco meal. I believe I took down 9 of those bad boys, edging my mom out by 2 (although she always says "It's not a contest," but I showed her eh?). There are plenty of things I should've gotten done this break that I didn't do, such as job searching, doing some financial aid stuff, and trying to help my dad with starting a website, but oh well I can be a bit on the lazy side and I was too busy being bored already.

Well, I guess I'll get heading off; I go back to school tomorrow so I'm excited to see my girlfriend and other friends again, and hopefully I can survive the workload I'll have in the upcoming week, as well as all of the other things I need to get done. Lata gata.