Zyngor | Saturday, May 16, 2015
As part of my second Safari shot, I shall be rolling with The Scariest Place category to accompany several Mumakil (or, being a hobbit, I suppose I should say Oliphaunts?) that have taken an interest in my gal. One even started barreling down on me - it's a good thing I take leg day seriously! Don't mind the ring over their head - I must have forgotten to disable that option before taking the shot (it just means they're part of a quest).

While Mumakil themselves are not evil, their enslavement by the Haradrim certainly causes them to be feared by most. If one of these oversized peanut-lovers are on your tail, it's bad new's bears for you. Although, if you are Legolas, it's basically a playground at Chuckie Cheese.

We have seen creatures like the mammoth in LOTRO, but the latest area of the game, East Gondor (Update 16) introduces this big papa of four-legged creatures in Middle Earth. Another shot below (not part of the Safari...more of an outtake) shows what happens when you try to mess with a Mumak without the use of your UI. I quite enjoyed the limbs captured in the image (and yes, it's over 9000). Ripperoni pepperoni! 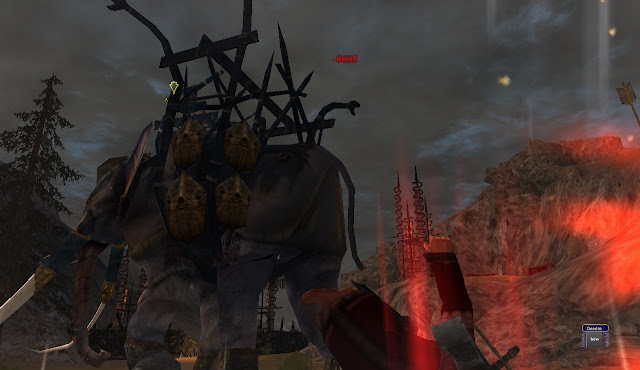