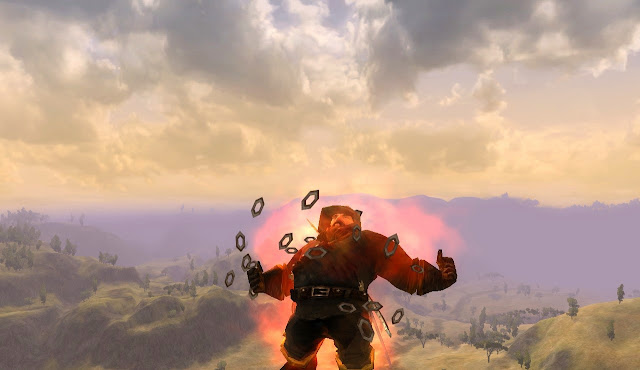 Isolation can be a powerful tool in an MMO, especially one based off a world as rich as Tolkien's. As part of Murf's Screenshot Safari NBI2015 challenge, I have chosen to snap a Selfie from one of my LOTRO challenge characters, Crabori, as he channels his rage atop Amon Sul in the Lone Lands.

Crabori's not gunna win any friendship awards anytime soon. Adjectives like 'grouch', 'curmudgeon', and 'frumpypants' have been used by those who've come across his path. Due to his loathsome nature, Crabori has decided to refuse his service to aid or join the folk of Middle Earth with their various inquiries. Instead, he aims to improve his skill with the blade in the simplest way possible - slicing down the baddies, and then dicing up some more.

In a nutshell, Crabori the Champion is not permitted to start or complete any quests. There are a couple exception, such as having done some in the intro as required to get through, and there maybe a couple FAR later down the road such as a minimal route to get Legendary Items and whatnot. Otherwise, he cannot start/complete Epic or zone quests, and instead must gain experience through enemy kills. He will also be going at it alone, unless he happens to meet a real jerk to bond with along the way.

Gearwise, I will try and keep him as self-sufficient as possible, in terms of using the resources he earns to fill things out. As such, the gold he earns from selling to a vendor (or selling something he finds on AH) or marks from deed(s) can be used as he wishes, including buying something through the AH (as he's only dealing business with an auctioneer). The true challenge is being able to stomach the amount of landscape kills required to get him the suitable amount of experience; it'll definitely be an on-going here-and-there campaign. He is currently sitting at roughly level 26.5 (out of the 100 current level cap).

This was really just a way for me to mess around with something different, accompanied with my admiration for just going out there, killing something, and seeing what the RNG loot table has in store for each kill. As long as I continue to try and keep my weapons up to shape either via AH (if he has the gold on him) or skirmish camp (if he's got the few marks built up from deeding), or possibly lootbox (permitted to open them, as long as he's got his own key and box), it'll be doable but extremely arduous.

Thanks to Murf for the neat challenge - from what I have seen, there are some really neat-looking shots and description so far! It's not too late to join - hit up the link in the first paragraph for a description of this event.